Autumn comes, leaves fall, and the days are growing shorter and darker. What else does October bring? An excess of fancifully carved out pumpkins, a sudden spike in the making/purchase of costumes and an increased risk of tooth decay. It can mean only one thing – Halloween is coming!

No doubt that we all love the Halloween tradition, but let us be honest – the pattern tends to keep repeating itself every year, doesn’t it? Pumpkin carving, spooky costume parties, whole yards scattered with ghoulish skeletons and jack-o’-lanterns, hordes of kids in whimsical costumes going door to door in the hunt for candies… we all know this sequence inside out.

Although most people spend Halloween dressing up or trick-or-treating, there are plentiful of countries which have their own, no less splendid, celebratory rituals. Let’s dive into some of them before we move on to the hair-raising treats we have arranged for you this year!

Perhaps these 5 real-world celebrations have given you a bit of inspiration to try some of them on your own? Or maybe you want to make this year’s Halloween the most memorable one ever in some other way? Then you should definitely join our bewitching contest! 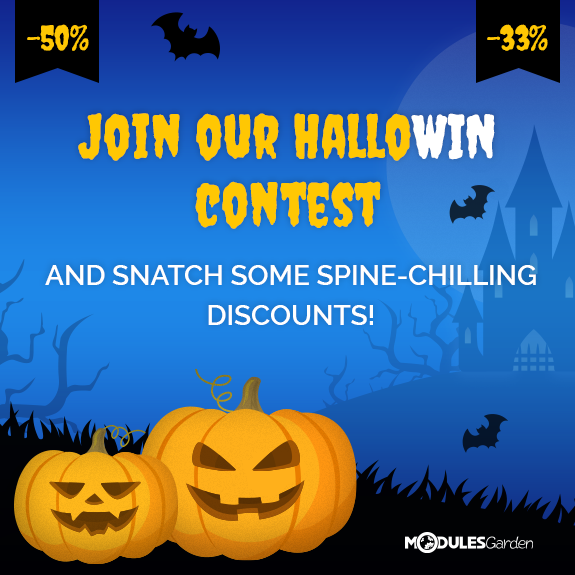 For a chance to win otherworldly generous discounts, simply post in the comments your answer to the following question:

Can you name 5 modules from our offer updated exactly in October?

We will be awaiting your replies until 1st November inclusive, and the nine most fortunate participants will be announced next Monday, in the comments section down below. Keep your ear to the ground!

Please be advised that one person is eligible for a single discount only. The three deals cannot be combined with one another or any other special promotions.

Leap at the chance to avoid being scared by your finances this Halloween!